“Kitschy” – 1) A style of decorative art and design in which ordinary objects have vintage appeal, “old-fashioned” characteristics. 2) Art, decorative objects or design considered by many people to be ugly, lacking in style, or false but enjoyed by other people.

A lull in activity, last week, afforded me some much needed time to catch up on a few Christmas orders and start making a little something special for myself too!

Over a year ago, while making garden garlands, the vision of a smaller, beaded, Christmas garland began forming in my mind.  I could just see it draped on one of those little foil trees; not the bright silver one, but the darker, tarnished looking one.  Ideally, it would be glass and metal, with a vintage, bohemian, kitschy look.  But, although I had plenty of beads, crystals, and such, I didn’t have an outstanding metal element.  That was, not until I set eyes on a lovely old, tarnished silver necklace in a popular local shop, Reclaimed Treasures on Main, in Haverhill Iowa. It could not have been more perfect!  Isn’t it sweet? 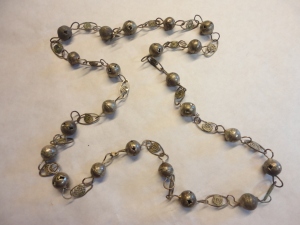 I loosely draped a string around my tree, and measured it, to determine that my garland needed to be about 90″ long to look it’s best.

Not wanting to disassemble the necklace before having some sort of plan, I laid out a mess of beads and baubles, in the colors and sizes I thought I might use, and gave them a good look over.

I decided the best way, for me, to approach this project was to break it down into small steps, and watch my progress as I went along.

I removed the jump ring that connected the necklace ends together.

To add some length quickly, I linked together 9 beads that I liked.  There were enough beads to make six identical lengths, but I wasn’t really concerned about them matching exactly, I would have substituted some if needed.  I inserted one of these beaded lengths after every other solid orb in the necklace.

Most of my beads already had wires, which was a huge plus. If there wasn’t a wire, I robbed one from another bead or made one. Some reclaimed crystals were added between the other silver orbs, and two of the little floral ovals were moved to each end. 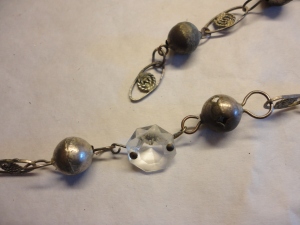 I loved the look of the grungy pearls, so I went back and added another one beside the small purple crystal beads.

Repeats of some of the beads I used were added to each end before going back and securing all the connections.

I thought I was done here, but as I was putting things away, I came across some awesome pale green pearls, and couldn’t resist tucking them in next to some of the red crystal beads.  Now, its finished, well … for this year anyway.  I have a sneaky feeling this piece will be a tempting one to keep adding to, don’t you agree? 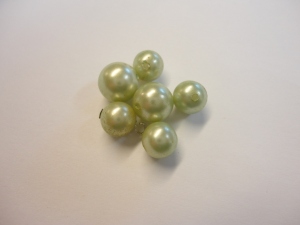 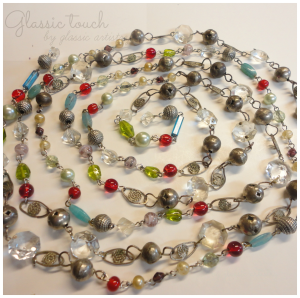 We’re not done yet, the real fun is just beginning!  There’s decorations to find, a tree skirt to make, and ornaments to get in the kiln.  I hope you’re able to join me as it all comes together this week-end for Part Two of My Vintage Style Christmas Tree….  Enjoy Your Week!