I knew I’d be making suet feeders someday after buying our curious grand kids a coconut to sample over a year ago.

I’d never made a coconut feeder, but thought it would be a lot of fun to play around with some scraps from my salvage stash and make something quirky to hang in our front yard tree.

The shells were already dried and had holes, so once I gathered some old springs and wire pieces they went together pretty quick.

I had planned on shaping wire into hangers, but found two wire pieces that had been cut from the top of old lamp shades and popped them into the holes instead. 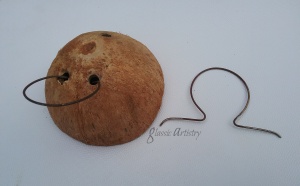 Wanting to provide some sort of a perch, I cut the small end off a bed spring, and wired it in with the wire arms of the hanger. 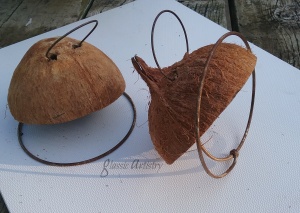 For suet, I melted a pound of lard (use lard/shortening or fat that will stay solid at room temp) in a saucepan over low heat.  After the lard was melted, I removed it from the heat and stirred in 2 C birdseed, a handful of raisins, ½ C breadcrumbs, and ½ C unsalted peanuts.  Let it cool.

To ready the shells for suet, the outside hole openings were covered with tape, and for a little added measure, the inside holes were plugged with peanut butter.

Wadded newspaper was used to keep the shell halves level in a shallow pan. 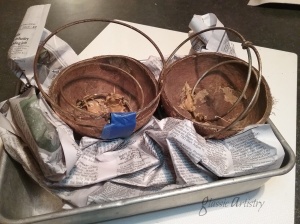 Fill the shells with cooled suet and let them sit until the suet solidifies. 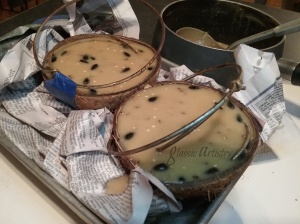 A super easy hanger was made by attaching a 2” metal ring to a 5” spring, and some bling on a jump ring to catch a little bird’s eye. 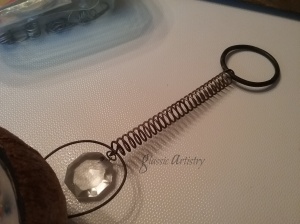 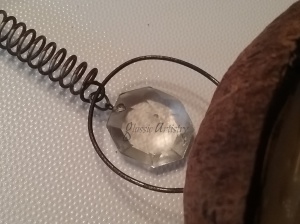 Bring on the birds!